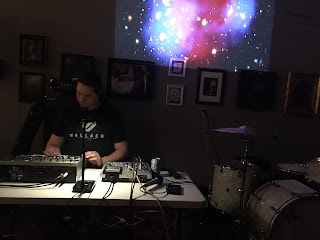 Buffalo’s HUNS and Westward Journey teamed up Nov. 9 at Craig LaRotonda’s Revolution Gallery on Hertel ave for an unforgettable farewell to HUNS’ Jake Whitefield. Smoke machines set fire alarms off in the packed gallery, but the band powered through, gifting the audience with two sets of noisey post-metal doom. As of Nov. 11, Whitefield has relocated to New York City, though he says: “We’re hoping to maintain the long distance thing as we have one more EP that we’re three-fourths done with writing and wanted to see it through. We’ll have to cut down on shows, but I’m hoping that I can come back periodically and maybe pick up one here or there. Or maybe even find some spots to play out here.” The show would prove to be a wonderful end to an era for HUNS, hosted by a beautifully eerie gallery strung with works of dark surrealism and preceded by an incredible ambient performance from Buffalo’s Eareckson Murray, performing as Westward Journey.

The gallery features many of LaRotonda’s unsettling neo surrealist works, including his iconic disembodied gorilla head, “Samson.” LaRotonda’s artwork ranges from nightmarish machinery to the strangely spiritual, with an occasional penchant for cryptozoology and other strange figures. Currently, Revolution Gallery features an intensely dark and emotive array of work from various artists as an exhibit named “Something Wicked.” These and other displays of visceral visual art in the gallery provided a perfect match to the sounds and songs that would fill the room that evening.
Murray opened the evening with a thought-provoking monologue: “The world is changing. Humans are changing. Technology is no longer merely a convenience, but rather, we depend on it. There is a very good chance that everyone in this room used the internet today. What used to be science fiction is now our reality. Humanity and technology are becoming more and more intertwined, and the concept of a mechanization of our human race is a realistic one, one that excites some and frightens others. The way we are moving forward in this society makes it a very real possibility. Will you reject our advancement as a species... Or embrace it?”
Naming the performance “Human 2.0,” Murray focused on a theme of cybernetic enhancement, using visuals of futuristic metropolises, robotic humans, supernovae, and simulated reality, with perfectly matching sounds created on his Yamaha RS7000, a combination synthesizer, sampler, and sequencer. Murray aspires for each of his sets to be different, and after five Buffalo performances and one in Rochester, Murray hasn’t repeated a song yet. Each of the Westward Journey sets feature a theme that starts with songs based on a specific emotion or atmosphere. Murray will often broadcast his work live on Facebook as he writes to give his audience a sense of what he’s working on. He then orders these songs to match a video series of clips from online sources perfectly, stating that “nothing is improvised.” Between the beautifully eerie synthesizer sounds and sequences and usage of matching visual elements, Murray aims to create an experience like that of an immersive, transcendent short film with a live soundtrack. The “short film” Murray graced the audience with was no exception.
Murray began a life in music at 5 years old, taking piano lessons for 10 years. Inspired by his sister and father, he learned to play guitar in 2002, and drums in 2007. A well-rounded musician with an ear for music theory, Murray has played in numerous bands and hosted many events at “The Lair” for years, though he doesn’t host events often as of recent years. Working with a vast variety of genres, many in the realm of metal, Murray first became interested in ambient music just over two years ago. Inspired by artists like Biosphere and soundtracks to films such as “Blade Runner,” Murray began creating his own ambient music shortly after and began performing it this year. Of his most recent work in the “ambient” and “noise” realms, Murray claims: “I love the noise crowd, I love the noise scene, but I do not consider myself a ‘noise artist’ … It’s very soothing instead of harsh.”
These “soothing” sounds were soon wonderfully contrasted by the brutishly heavy sounds of the Buffalo favorite “HUNS.” An instrumental trio delving in doom, noise, punk, and metal, the band has gained a devoted following since 2014. Unfortunately for its following, the band confirmed that this would be their last regular performance before bassist Jake Whitefield would move to New York City, though the band will continue to play less frequently and when possible. Despite marking the end of an era for HUNS, they played with as much chemistry and intricacy as ever, filling the dreamlike art studio with the sound of eternal damnation as Nosferatu loomed over drummer Frank Di Maria via a projector which cycled between clips from the movie, scenes of war, and various other cult films.
While not necessarily a “noise band” in the strictest sense, HUNS often deviates into the avant-garde with strange uses of guitar and bass effects, creating the sound of horror. Preceding the first and second sets, as well as between individual songs, guitarist Brandon Schmitt played recordings of labyrinthine guitar and bass drones and loops that he and Whitefield created prior to the performance. Whitefield says these were born out of “boredom and curiosity mostly,” citing that they “recorded a whole bunch of sounds and manipulated them in various ways, cut them up into some smaller bite size pieces, and put them between tracks” to the end of adding some “mystique.” In the scope of the entire performance, these interludes could easily serve as their own separate performance, building tension and ambiguity, adding yet another layer to the evening and can even be streamed or downloaded on the band’s Bandcamp page as “Übergang I & II.”
After the second set, the crowd demanded another song from the band, and HUNS followed with a pulverizing array of guitar noise, riffs, and blast beats, all collapsing into one final destructive chord. Visibly affected by the sadness of the changing seasons of life, Di Maria hugged Whitefield after the last song, displaying further that frightening music is often made by the warmest of friends.

November 01, 2018
The second millennium burst through our dissociated society nearly two decades ago, and the world dashes with more force and more speed than ever before. Poorly lit billboards flash, smartphones incessantly beep and click and speak to their users, and an ever-present pressure to produce more, to consume more, to “do” more permeates every tear in the fabric of our global culture. We talk faster, we move faster, we process faster than any culture before us, but at what cost? Among greed, violence, socioeconomic and political unrest, and an overall sense of amnesia, this speed has driven its culture’s citizens to more pressure, anxiety, and repressed tension than they can take. People lash out at each other verbally and physically, both in person and on the digital world of the internet, further isolating themselves and building only more tension and destruction. It seems our world has reached a critical point, and the dam may burst at any moment. ​      The question arises, what can b
10 comments
Read more

January 15, 2019
photo taken from Gray's Anatomy of the Human Body (public domain)        While at first it may seem out of place in a noise blog, often musicians, sound artists, and listeners alike overlook the most important part of any musical experience: the human ear. An incredible piece of machinery, this complex, multipart system creates the perception we know as sound simply from vibrations in the air, but how do we get from air vibrations to the visceral emotion elicited by a favorite piece of music or sound art? The answer lies in both physical conduction and neural sensation.         Though this information can be found in many textbooks, Peter W. Alberti’s World Health Organization (WHO) article, “The Anatomy and Physiology of the Ear” provides an in-depth look at how hearing works.         The human ear can be divided into three parts: the outer ear, the middle ear, and the inner ear. The outer and middle ear deal primarily with continuing the resonances of air vibrations, phys
4 comments
Read more